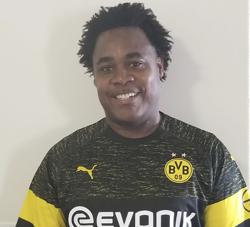 During his illustrious career, Sheriff has coached players from all skill levels and backgrounds; including World Cup players! His more than thirty years of experience as a player, coach, and technical director has prepared him to be knowledgeable and skilled in taking players to the any level of play that they desire to achieve!  Sheriff is an in depth tactician, master of technical and tactical aspect of the game that regards individual quick tactical thinking on the pitch as the measure of success.

We can tell you all of the things that set our Director of Coaching apart from other clubs, but we believe that the results speak for themselves:

2005 to 2006
Head Coach Seba United F.C.   (Premiere League)
Took reigns of Seba United, and came from last place to end the season in 4th position. Voted Coach of the month twice, and runners up for Coach of the year in the same season.

Don't take our word for it!  Here are just a few of the players that Sheriff has mentored and coached:

Where did he learn all of this?  It all starts with amazing mentors and coaches!

Coached by some of the top coaches in the world: